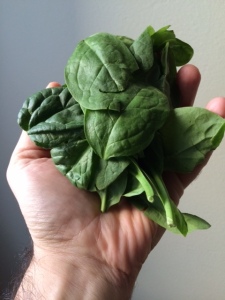 I have always loved this recipe, in part for the lovely way in which it is written. I made a version of it once, with less (but still plenty of) butter. Even if you’re not big on spinach, it’s worth reading.
—————–
From Elizabeth David’s French Country Cooking
The recipe apparently comes from Jeanne Savarin.

“The Abbe Chevrier, contemporary of my great-great-uncle (Brillat-Savarin), left a reputation in Bresse for being the perfect gourmet; he and Brillat-Savarin were the best friends in the world; the Abbe, however, did not always disclose his culinary secrets to Brillat-Savarin.

Amongst other delectable things, Brillat-Savarin was excessively intrigued by the spinach cooked in butter of the Abbe Chevrier. ‘Nowhere,’ he used to say, ‘does one eat spinach, simple spinach cooked in butter, to compare with his. What can be the secret?’ Brillat-Savarin’s mind was finally put at rest; he discovered the famous secret. Here it is.

‘On Wednesday (for Sunday) choose your spinach, young leaves, neither too old nor in flower, of a good green and with their middle ribs. In the afternoon clean the spinach, removing the stalks and wash it carefully. When it is tender, drain it in an enamel or china colander; drain out as much water as possible by pressing the leaves firmly down in the sieve; then chop them finely.

‘Now put them in a pan (enamel or glazed earthenware) with some fine fresh butter and put on to a very low fire. For a pound of spinach allow 1/4 pound of butter. Let them cook gently for 30 minutes, then take them off the fire and let them cool in the same pan. They are not to be served today.

‘Thursday: Add another 1 1/2 ounces of butter to the spinach, and cook again for 10 to 15 minutes over a very low fire; again leave them to get cold; they are not to be served yet.

‘Friday: Exactly the same operation as the previous day; the same quantity of butter, the same length of cooking. Do not be tempted.

‘Saturday: Again the same operation as Thursday and Friday. Beware of temptation; the spinach will be giving out a wonderful aroma.

‘Sunday: At last the day for your expected guests has arrived.

‘A quarter of an hour before you intend serving the dinner, put the spinach again over a low flame, with two good ounces of butter, for 10 to 12 minutes. This time, take them out of their pan and put them in a warmed vegetable dish and serve them very hot.

‘In the course of five daily cookings, your pound of spinach has absorbed 10 1/2 ounces of butter. Such was the Abbe Chevrier’s secret.’

As well as the 10 1/2 ounces of butter the spinach has absorbed, it has also reduced to practically nothing. It is certain that the butter does give the spinach a most delicate flavour, but it is advisable to cook at least 2 or 3 pounds if all this performance is to be gone through. The recipe is not one to be taken too seriously.”