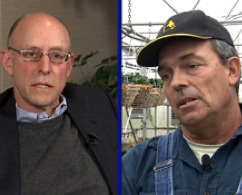 From Iowa Public Television’s “Market to Market”, Pollan and Hurst Debate the Future of Agriculture (The link goes to a 10-minute video, with transcript.)

…nutrition is only one aspect of a larger debate over America’s entire food system. And production agriculture has been blamed for everything from pollution of the nation’s waterways to Americans’ ever-increasing waistline.

Market to Market recently caught up with two of the drama’s protagonists: Michael Pollan, an outspoken critic of America’s food system who wrote The Omnivore’s Dilemma; and Blake Hurst, a Missouri farmer who countered Pollan with a piece he calls The Omnivore’s Delusion.

Producer Andrew Batt examined the merits of production agriculture with both men and filed this report.

And here’s a link to Hurst’s famous article: The Omnivore’s Delusion: Against the Agri-intellectuals.

I'm a philosopher who teaches at Ryerson University's Ted Rogers School of Management in Toronto, Canada. Most of my scholarly research is on business ethics and healthcare ethics.
View all posts by Chris MacDonald →
This entry was posted in Uncategorized. Bookmark the permalink.
Loading Comments...
%d bloggers like this: