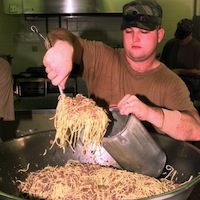 Over at the Authenticity Hoax blog, Andrew Potter just posted this interesting commentary, America’s New Age Army, about a story from yesterday’s NYT, Making Soldiers Fit to Fight, Without the Situps.

…about the sorry state of today’s recruits. The short version is that recruits today are fat and slow, with poor bone density caused by eating too much junk food and spending too much time playing video games. As a result, they are getting injured during basic training at a much higher rate than even a few years ago.

Much of the piece is about physical training, but part is about nutrition, too. Andrew notes:

The NYT story quotes Lt. Gen. Mark Hertling, the man responsible for overseeing basic training for the Army. According to the General, “This is not just an Army issue. This is a national issue.”

So, now that the U.S. military has declared nutrition to be a national problem, can we expect a major effort from the US government to improve national nutrition standards?

I'm a philosopher who teaches at Ryerson University's Ted Rogers School of Management in Toronto, Canada. Most of my scholarly research is on business ethics and healthcare ethics.
View all posts by Chris MacDonald →
This entry was posted in Uncategorized. Bookmark the permalink.