US Government Contradicts Itself in Promoting Cheese

Posted on November 7, 2010 by Chris MacDonald 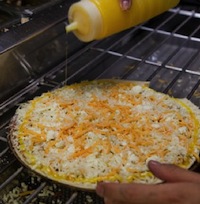 [Addendum (Dec. 14 2010) — it seems the NYT article cited below may have been misleading. See this blog entry here. Thanks to reader Anastasia for notifying me.]

I love cheese. Probably too much. If I ate as much of it as I would like, as often as I’d like, I would probably end up with serious health problems. But at least I know I love it too much, so I make a conscious effort not to go overboard. But it’s not clear that most consumers are conscious of the nutritional pros and cons of cheese, and enjoying it with suitable moderation.

And the American government is apparently not helping matters.

See this story, by Michael Moss, for the NYT: While Warning About Fat, U.S. Pushes Cheese Sales

….Urged on by government warnings about saturated fat, Americans have been moving toward low-fat milk for decades, leaving a surplus of whole milk and milk fat. Yet the government, through Dairy Management, is engaged in an effort to find ways to get dairy back into Americans’ diets, primarily through cheese.

Americans now eat an average of 33 pounds of cheese a year, nearly triple the 1970 rate. Cheese has become the largest source of saturated fat; an ounce of many cheeses contains as much saturated fat as a glass of whole milk….

With regard to Dairy Management, the NYT article says this:

The organization’s activities, revealed through interviews and records, provide a stark example of inherent conflicts in the Agriculture Department’s historical roles as both marketer of agriculture products and America’s nutrition police.

I'm a philosopher who teaches at Ryerson University's Ted Rogers School of Management in Toronto, Canada. Most of my scholarly research is on business ethics and healthcare ethics.
View all posts by Chris MacDonald →
This entry was posted in health, junk food, marketing, public policy, USDA. Bookmark the permalink.

2 Responses to US Government Contradicts Itself in Promoting Cheese