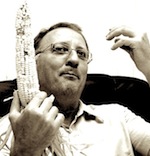 The world of GM foods is apparently reinventing the spaghetti western. In Italy these days, the debate over GM has turned into a wild-west-style battle between vigilantes.

Here’s the story, from Elisabeth Rosenthal, writing in the NYT: In the Fields of Italy, a Conflict Over Corn.
Here are some key bits:

Giorgio Fidenato declared war on the Italian government and environmental groups in April with a news conference and a YouTube video, which showed him poking six genetically modified corn seeds into Italian soil.
…
The seeds, known as MON810, are modified so that the corn produces a chemical that kills the larvae of the corn borer, a devastating pest. Yet while European Union rules allow this particular seed to be planted, Italy requires farmers to get special permission for any genetically modified, or G.M., crop — and the Agriculture Ministry never said yes.
…
On Aug. 9, 100 machete-wielding environmental activists from an antiglobalization group called Ya Basta descended on Vivaro and trampled the field before local police officers could intervene. They left behind placards with a skull and crossbones reading: “Danger — Contaminated — G.M.O.”

It’s interesting to see pro-GM farmers getting in on the vigilanteism. Historically, GM-related-lawlessness has mostly been the domain of anti-GM protestors. (See, e.g., this 2008 story about vandalism of GM crops in the UK.) Of course, neither pro- nor anti-GM vigilanteism can be ethically justified very easily. Disagreement with the law doesn’t license you to take matters into your own hands. Nor does passionate belief in your cause. Certainly, under certain circumstances, civil disobedience can be justified. But on any reasonable view, and in any nation generally subject to the rule of law, the conditions under which vigilante action is justified are relatively narrow. And the onus is on the law-breakers to make their case. (For a useful philosophical discussion of the issues, see this article: Civil Disobedience.)

(And here’s a version of the story, from last week, that focuses a bit more on Mr. Fidenato. By Colleen Barry, writing for The Associated Press: Italian farmer pushes genetically modified crops.)

(Thanks to Sheldon for suggesting I blog about this.)

I'm a philosopher who teaches at Ryerson University's Ted Rogers School of Management in Toronto, Canada. Most of my scholarly research is on business ethics and healthcare ethics.
View all posts by Chris MacDonald →
This entry was posted in activism, agriculture, biotechnology, ecosystems, environment, farmers, genetic modification, international, regulation. Bookmark the permalink.