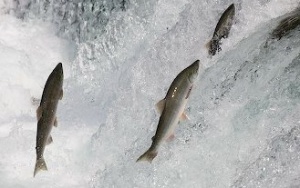 We are getting closer and closer to seeing genetically-modified salmon on the dinner table.

When that happens (yes, “when”, not “if”) then GM salmon will be the first genetically-modified food animal to be consumed by humans.

The developer of genetically engineered salmon for human consumption is now setting its sights on Health Canada, after U.S. regulators on Thursday announced their review of AquaBounty Technologies Inc.’s historic application for the American market is nearly complete.

The U.S. Food and Drug Administration published details of the last stages of its review for AquAdvantage Salmon, made from eggs produced in a hatchery in Prince Edward Island. The genetically engineered fish can grow at twice the normal rate, and the company, headquartered in Massachusetts with Canadian operations in P.E.I. and Newfoundland and Labrador, has been trying for a decade to get approval to become the first genetically engineered animal that people would eat….

1) The Gazette story quotes an opponent of the salmon as saying that GM salmon are “unnecessary.” Two responses occur to me. First is that products don’t go to market because they’re “necessary” — they go to market because they’re useful to someone. The second response is that fast-growing fish, even if not strictly necessary, are likely to be a boon to the world of aquaculture (and likely to drive the price of farmed salmon down, which is good for consumers). This is even more important than it sounds, if (as James McWilliams argues, in his book Just Food) aquaculture is a crucial element of any sane, environmentally-responsible system of protein production.

2) AquaBounty‘s CEO insists that the American and Canadian regulatory processes are separate. And technically, that’s true. But as was pointed out in a story I blogged about last year, once the FDA approves the fish, then under international trade laws, the Canadian government will likely have to accept the product too.

3) As I also pointed out in that same blog entry last year, AquaBounty once upon a time featured a promise, on its website, to make sure its salmon are labelled as genetically modified, once they reach market. And that promise seems to have disappeared from the company’s website. And the Gazette story says that the FDA will be considering whether to require labelling. I suspect it’s unlikely that the FDA will end up requiring labelling, but if it does, that could pose serious marketing problems, not least because major grocery chains have thus far been very hesitant to allow positively-labeled products into their stores.

4) I’m on record as saying that, according to my best reading of the scientific consensus, there’s no particular risk from GM foods. But I’ve also said that the environmental impacts are less clear. If there is any reason to be hesitant about GM foods, it has to lie in ecological impact. In that regard, AquaBounty’s website has a useful explanation of why the company believes its salmon pose no environmental threat. (Basically, they’re making only sterile fish, i.e., ones that cannot breed, so there’s no risk of them interbreeding with wild salmon. Also, the company points out that farmed salmon generally do poorly when they escape to the wild.) Critics, of course, are unlikely to be convinced. Once you’ve called a thing “grotesque” (as one of the critics quoted in the story does) you’ve signalled that you’re not really looking for those kinds of assurances in the first place.

I'm a philosopher who teaches at Ryerson University's Ted Rogers School of Management in Toronto, Canada. Most of my scholarly research is on business ethics and healthcare ethics.
View all posts by Chris MacDonald →
This entry was posted in aquaculture, biotechnology, ecosystems, ethics, fisheries, genetic modification, labeling, science. Bookmark the permalink.