Should Food Grown in Space Be Labelled? 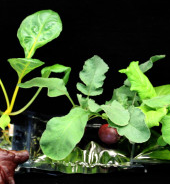 People are big on food labels. Some people want labels on genetically modified foods. Others want foods labeled if they contain so-called “pink slime” (LFTB, or ‘lean finely textured beef’). Others want animal welfare labels. Lots of concerns, for reasons good and bad. For my part, I’ve argued before that labelling isn’t always the answer.

What about food grown in space? A recent story revealed that astronauts aboard the International Space Station (ISS) have been dining on red romaine lettuce grown aboard the station. The question occurs to me: were it available to the public, should space-lettuce and other space-grown foods be labeled? It’s obviously not for sale on earth — and likely never will be. NASA wants to figure out how to grow food in space so that it can be eaten during space exploration and colonization. But that doesn’t mean the labelling of space-grown food, sold here on Earth, is not an interesting hypothetical question.

One of the characteristics that tends to make people ask for labelling is when the food is produced in some way that is seen as “unnatural.” It’s hard to imagine anything that fits the bill better than space-grown lettuce:

Each of the six planting “pillows” [seed beds] had a growth medium that includes a type of clay used on baseball fields and controlled-release fertilizer. Red, blue and green LED lights and water injections activated the seeds and allowed them to flourish for 33 days of growth.

Oh, and all of this is done under zero-gravity conditions.

The result? Astronauts reported that the lettuce was somewhat bitter. More information about nutritional composition and microbial activity will have to wait until chemical analysis is completed by NASA scientists back on earth. And if that analysis reveals that space lettuce is fundamentally the same as Earth lettuce? Surely that would obviate the need for labelling, in the very hypothetical case of selling space-grown produce on Earth. Some people would surely still call for labelling — namely, the people who are currently calling for labelling of GMOs. Some such people point out that we “don’t know the long-term effects” of GMOs, because they haven’t been subjected to long-term controlled trials.

Well, the same goes for space food. Such food never will be subjected to long-term controlled trials, either in space or on Earth. But they’ll be tested here on Earth for toxicity and nutritional composition. Stuff that matters. And then astronauts on long missions will eat them, and enjoy them, and be glad of them. How unnatural is that? 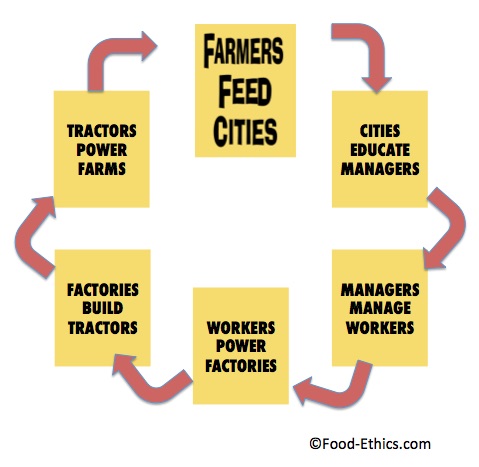 Food Ethics vs The Food Movement

Paul Thompson is one of the real stars of the food ethics realm. He’s a smart philosopher and well informed about the relevant issues. In the blog entry linked below, he considers the difference between the “food movement” and what he calls simply “food ethics.”

…it is not clear to me that the “social movement” framing is the best way to understand food justice…
…“Food ethics” is less sure that we have the answers than the food movement, but it shares many of the same concerns with our existing food system. Food ethics would be the cultivation and dissemination of a more reflective, more open-minded and more compassionate consideration of the way that food is produced, processed, distributed, and consumed at both local and global scales. It sees many of our current problems as a failure to think broadly and deeply enough about food and agriculture. It hopes to mobilize the resources of philosophical ethics—a rich moral vocabulary and a willingness to engage in serious debate—both as social critique but also within the corridors where key decisions about food system policy and practice are currently made….

Does “Buy Local” Have a Neoliberal Slant?

You can read the full document for free here: Public health promotion of “local food”: Constituting the self-governing citizen-consumer, by Colleen Derkatch and Philippa Spoel

Abstract
This article explores how the recent and growing promotion of local foods by public
health units in Ontario, Canada, rhetorically interpellates the “good” health citizen
as someone who not only takes responsibility for personal health but, through the consumption and support of “local food,” also accepts and fulfills her responsibilities to care for the local economy, the community’s well-being, and the natural environment. Drawing on Charland’s concept of constitutive rhetoric, we analyze a selection of public health unit documents about local food to develop a textured account of the complex, multifaceted forms of health citizenship they constitute. Our analysis reveals that,despite their appeals to environmental sustainability and community well-being, these materials primarily characterize the ideal health citizen as an informed consumer who supports the interests of the neoliberal state through individualized lifestyle behaviors, consuming goods produced and distributed through private enterprise. By exhorting individuals to “buy local,” public health discourse therefore frames responsible health citizenship principally in consumerist terms that constrain the range of available options for citizens to engage in meaningful action vis-à-vis their food systems.

You Say You Want Ethical Food, But Really You Want Cheap Food

People today are increasingly demanding restaurant food that is ethical, interesting, and of high quality. Or at least, that’s what they say they want. True demand, in the economic sense (which is the sense that counts in the food industry) is what matters here. In other words, it’s easy to say you want x, y, and z when some reporter or university researcher or PETA rep with a clip-board gets in your face. But when you’re in line at McDonald’s, you may choose differently.

Check out this short piece on that topic:
Millennials are lying about what they want to eat, and it’s destroying fast food

“…All of these efforts flopped, and there’s an important reason: Millennials are lying about their food habits.

Millennials say they want food that is high quality, free of additives, and sustainable, but they aren’t always willing or able to pay for it….”

Food labelling is a very. big. issue. Some labels matter a lot. Some matter less. Some labels are required by law. Some are not. Some labels have clear, precise, even regulated meanings. Others are purely a matter of convention, and others mean very little at all.

One of the most important kinds of labels, naturally, are ones mandated by regulations. But what those regulations require, and what the labels mean, is not always clear. So some of you will be interested to see this FDA Food Labeling Requirements Ebook, published by label company supplier Foodpackaginglabels.net. I haven’t read the book yet, and can’t attest to its accuracy, etc., but it looks useful.

The Moral Hierarchy of Food

This piece focuses on the way in which an obsession with food is in some sense replacing (or parodying?) religion, for some people.

The new religion: How the emphasis on ‘clean eating’ has created a moral hierarchy for food

Professor Gillian McCann “argues that the rise in food movements has coincided with a decline of religion in society, with many people seeking familiar values such as purity, ethics, goodness. But these movements also tend to encourage behaviours that have steered a generation away from religion: Judgment, self-righteousness, an us-versus-them mentality.”

As my pal Andrew Potter would likely point out, here, most of what we observe in this moral hierarchy of food is consistent with another hypothesis, namely that the holier-than-thou aspect is yet another instance of the basic human drive toward status-seeking. In other words, part of the way one person makes herself feel special, feel superior, both in her own eyes and in the eyes of others, is by finding new and exotic ways to differentiate herself in terms of diet. 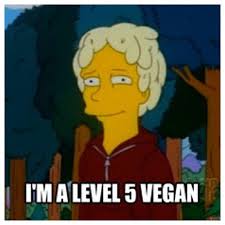 This was parodied nicely in the episode of the Simpsons in which Lisa tries use her veganism to impress her new boyfriend, who replies, “I’m a level 5 vegan — I won’t eat anything that casts a shadow.”

Posted in ethics
The Food Ethics Blog
Blog at WordPress.com.